When Vellum generates the Print edition of your book, it automatically applies several advanced layout features to the pages and paragraphs of your book.

These features are always enabled: you don’t have to make any changes to apply them. (You may not even know all that Vellum is doing.)

Because some of Vellum’s automatic layout features can be time-consuming to perform, you may not see all of them applied in the Preview.

By default, Vellum’s Preview is shown in Draft mode, which will give you an overall idea of how your book will appear while remaining responsive to changes you make.

For a more accurate representation, you can change to Proof mode: In Proof mode, the Preview will exactly match the final PDF, applying all of the features described below. Proof mode can be a bit slower, so we recommend only using it when accuracy is important, and switching back to Draft mode whenever you need to make significant changes to your book.

When the last line of a paragraph appears at the top of a page, it’s called a widow.

Because a widow can give the page an awkward appearance, Vellum will automatically adjust the layout of your Print edition to avoid one, moving a line from the previous page to join it:

When the first line of a paragraph appears at the bottom of a page, it is sometimes called an orphan.

Since an orphan can be distracting when it begins a new section, Vellum will prevent any orphans that might appear after a Scene Break or Ornamental Break.

As Vellum performs changes such as moving a line to prevent a widow, it ensures that each two-page spread of the book remains balanced, with the text at the bottom each page ending at the same position:

Note: Vellum considers a balanced spread a high priority, and may leave a widow in place if it is unable to balance a spread when preventing a widow.

If a Scene Break appears at the top or bottom of a page, then it will be drawn as three small bullets, rather than as whitespace. Applying this subtle ornamentation clarifies to the reader that this break is intentional and not, for example, a printing error. 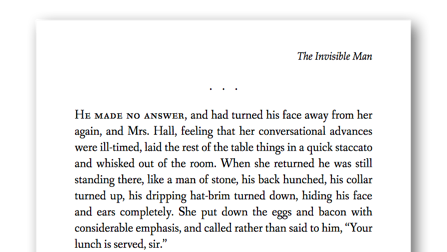 A short, final word of a paragraph that appears on its own line is sometimes referred to as a runt.

Vellum prevents runts from occurring by specifying that they should be included with the word that comes before it:

Vellum applies a similar adjustment for hyphenation, and only allows the final word of a paragraph to be hyphenated if it is extremely long.

Note: If you find a word that you think shouldn’t appear on its own line, you can always precede it with a non-breaking space. To add one, hold down the Option (⌥) key as you press the spacebar.

It’s possible for the final page of a chapter to contain just a few lines.

To accomplish this, Vellum moves lines from previous pages in the chapter, maintaining that every spread is balanced.

When a Subhead lands at the bottom of a page, Vellum will move it to the top of the next one.

You can also enable this behavior for an Alignment Block using Keep With Next Paragraph.